ABOUT US - OUR STORY

In the autumn 2005 we have made a decision that changed our lives. We decided to get a puppy, a hovawart puppy to be exact, who would live a life as a member of the family and thus enjoy all the benefits.

We are a family of 4 - Tanja, Smiljan, Tea and Aljaž, and we live in a small village in the countryside of a town named Novo mesto (the town is located in southeastern Slovenia). Next to our house is garden, orchard, meadow and what dogs like the most - the stream. We believe this is the best possible environment for people and dogs.

In autumn 2005 we made a decision that changed our lives. We decided to get a puppy, a hovawart puppy to be exact, who would live a life as a member of the family and thus enjoy all the benefits. Back then the breed was not very well known (it still isn't) and although we had read much about it, we decided to attend a meeting to see them live, see all 3 possible coat colors and to get to know their character even better. We talked with owners and breeders about their hovawarts and everyday activities with them. After processing all the information we had received, the only question left was - Where to get a puppy?

This turned out to be the hardest part - to actually GET a puppy. In spring 2006 there were no hovawart litters in Slovenia, so we sent a few emails abroad. Miss Christine Weingertner from the Austrian hovawart club sent us information about puppies from 3 different breeders - in the first litter all of the puppies already had new families, in the second there was only one female (of course, already reserved) and in the third litter we were the first family to be interested in a black and tan female. When the opportunity appers, you have to grab it - so a day later we were on the way to see the future mother.

Even though she was due in a week and already had a big belly, she was still the "Chief Security Officer" at the ranch. Her hair shone brightly in the sunlight while she was happily moving around us. Miss Monika, the breeder, was very friendly, she showed us all the documents about the parents, their breeding exams, health test and so on. She promised to call as soon as the puppies were be born, and so she did. It was Sunday morning, June 11th when the phone started ringing - "The kids are here, we have 9 pups, 4 girls and 5 boys! All black and tan". Among these 4 girls there was a little princess later named Alessa vom Trakehnergestuet, who turned our lives upside down. Thanks to her, we have met many new friends. Once you have a hovawart and you start to attend hovawart meetings and other events you are in it for life. In the following years Alessa passed NZB, JB, ZTP, won shows, passed obedience exams and much more. In 2008 we registered the kennel "ex Horto Albo" at FCI and in 2010 Alessa gave birth to her first and last litter of 9 puppies.

When Alessa turned 6 years old, we decided to get her some company. After 6 years of living with a hovawart we felt prepeared for new challanges, and after checking the list of expected litters one combination seemed interesting.

The parents of the expected litter had pedigree unrelated to slovene hovawarts. Their names were Danja vom Haselrieder Wald and Byte Wachter der Zukunft. Danja gave birth to 12 puppies, 7 males and 5 females. With the help of the breeder Lothar Grawunder and miss Heidi Dickfeld, we picked our new girl - Avera vom Ilsesee. How she would grow and develop was a matter of time and a mistery.

We can say that we were quite surprised by how Avera ultimately turned out. We soon discovered that she lacks the P3 teeth on both upper sides and the results of her hip x-ray were HD B/B. A year later we found out that her thyroid is not functioning well enough so now she is on daily medication for that as well. Because of all these problems, she is not suitable for breeding but on the other hand she has a great character and is a perfect family member.

A wish to get a third female appeard soon after getting Avera, but for some good things one has to wait a bit. We were sure there would be no big difference between living with 2 or 3 hovawarts. This time, a polish kennel (owned by miss Anna Pieczynska) was chosen and after almost 2 years of waiting, the Enormous "O" litter was born on August 13th out of a polish-finnish combination. Among the 3 females, there was only one black and on October 8th she flew from Warsaw together with Tea to her new home in Slovenia. Her full name is Enormous Ocean Breeze, call name became Riva and her parents are Enormous Brilliant Vegas & Steinroller Odd-Leif.

While expecting Tea to return to Slovenia with Riva, Alessa's health deteriorated so much that there was simply no way to save her. We lost our beloved girl way too soon, but we will remember and love her forever.

Riva and Avera have accepted each other well, with Avera being so patient, that we are genuinely surprised. It means a lot to us that they are getting along. Little Riva is a pleasant dog with a kind and welcoming personality and is quick to learn. She finished puppy school at less than 4 months of age. Our home is thus ruled over by two hovawarts that regularly brighten out days. 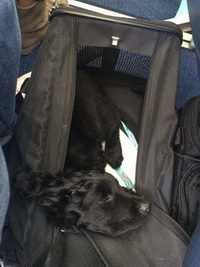 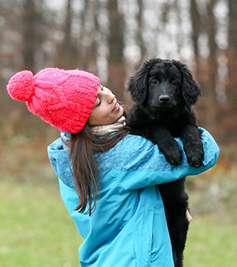 Little Riva grew quickly and developed as expected. She and Tea began to participate in shows while I continued schooling her by the BBH program. Shortly before Riva’s first birthday, Avera’s health began to deteriorate until we tragically lost her in 2018. But Riva was not the only hovawart in our home for long. As a mystery birthday gift for me, Tea returned from Warsaw with a little black and brown furball – Enormus Surprise Surprise – or as we’ve come to call her, Naya. She and Riva became best friends right off the bat. Naya is a true little bomb of energy – a curious, playful, and happy dog who enjoys shenanigans and trickery on a daily basis. We began schooling, naturally with the Club of dog lovers K-9.

In November 2018, after eight long years, our kennel once again produced a litter – Riva’s 12 puppies of the R litter. 6 males and 6 females. Riva turned out to be a wonderful mother, while Naya performed the role of a nanny flawlessly. At school, Naya is an exceptional student, almost a “nerd”. The A and BBH exams were a piece of cake, as was ISP BGH1. She successfully attended many shows and completed several championships. We performed a hip x-ray, which resulted in an excellent score of A/A. In June Naya successfully completed her breeding exam and out kennel officially gained another breeding dog. In winter of 2020/2021 we plan to have a new litter with Riva and Naya’s first in spring 2021.