The litter is expected February 23rd. 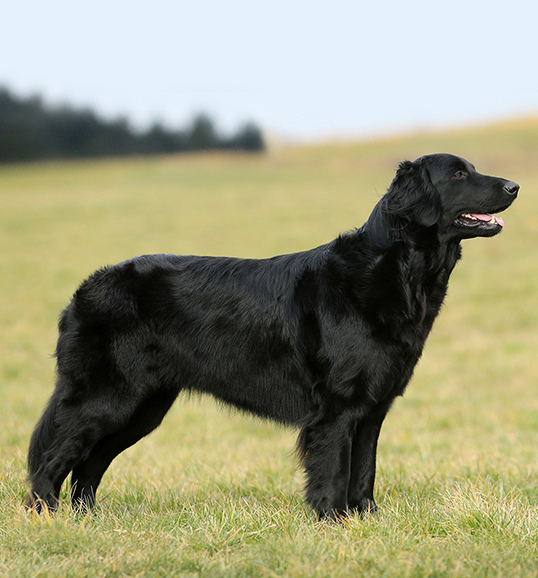 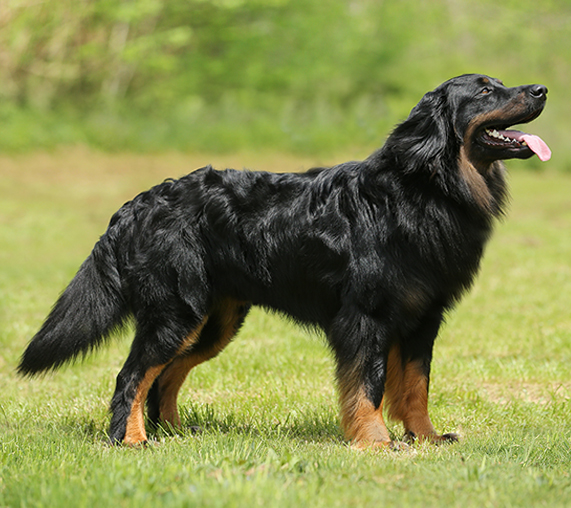 Today's ultrasound examinaton confirmed our assumptions - Riva is expecting puppies and is due around the end of February. The father of the litter is a young but brilliant Slovenian stud male – CH. Elutz Grofje Celjski. Because you all already know a lot about Riva, we are dedicating the spotlight to Elutz.

Elutz is a 3-year-old family hovi. He passed the ZTP (SLO) with flying colors, earning many compliments regarding his temperament and exterior. He is a »cool hovi« - very stable mentality, self-confident, unbothered, relaxed, playful with a good drive, friendly to strangers, kids and other dogs. He is quite active, loves hiking, biking and has a passion for IGP trainings. He is fully trained in IGP1 (exam unfortnately postponed due to Corona Virus).

According to his ZTP, he fits the strong type characteristics (WH 67 cm, RB 15 cm), has a strong head, a correct stop, a scissors bite with no missing or double teeth, tightly fitting lips, medium dark eyes, excellent pigmentation, correct ears in every aspect, a neck of a correct length, a correct chest, a very strong and straight backline while standing and during movement, and a tail correct in every aspect. His markings are correct with no white. His front and back legs are straight and parallel with good angulation.

His owner has presented him six times and he was placed as 1st in the class every time. His first show-day ended up with Elutz being the HWKS Club Winner ’18 + Best male (intermedia class). A few months later, as the youngest in the class, Elutz won the champion class at the HWKS Special Club Show ’19 (Wesche) and was also selected as the Best male at the IHA Graz '20 show (Kerschner).

We are very thankful to his owner Sašo Zupanc, who agreed to do quite a few additional health tests with Elutz and thus made this breeding possible. We can only wish that all stud males had such owners.

19.2.2021 | Just a few days more and we will meet our "E" puppies. Riva is feeling good, her walks are very limited now as she prefers to enjoy the home garden. She weights 47,3kg now, meaning she gained 11kg. The puppy room is fully ready... and now wait :) 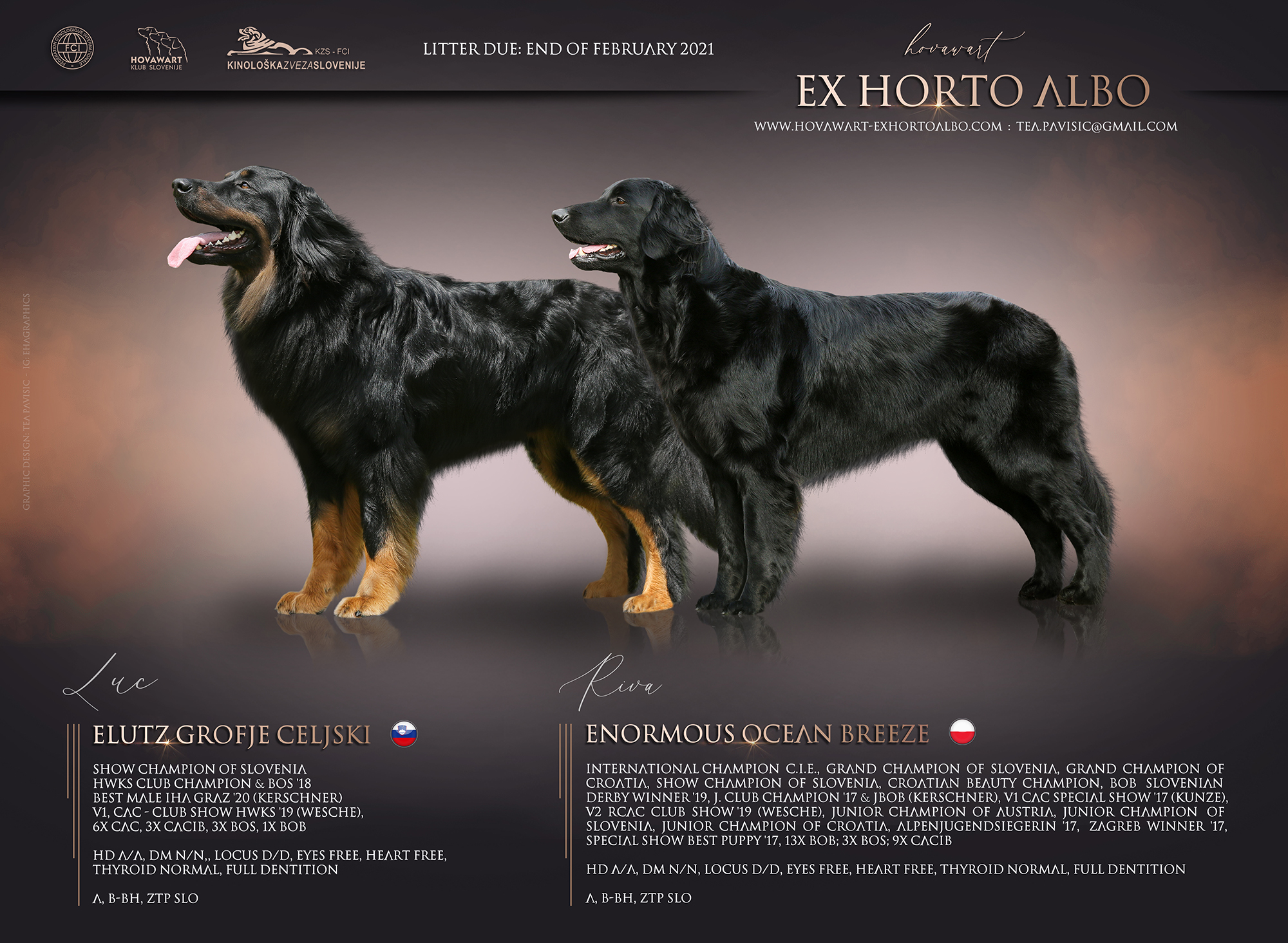 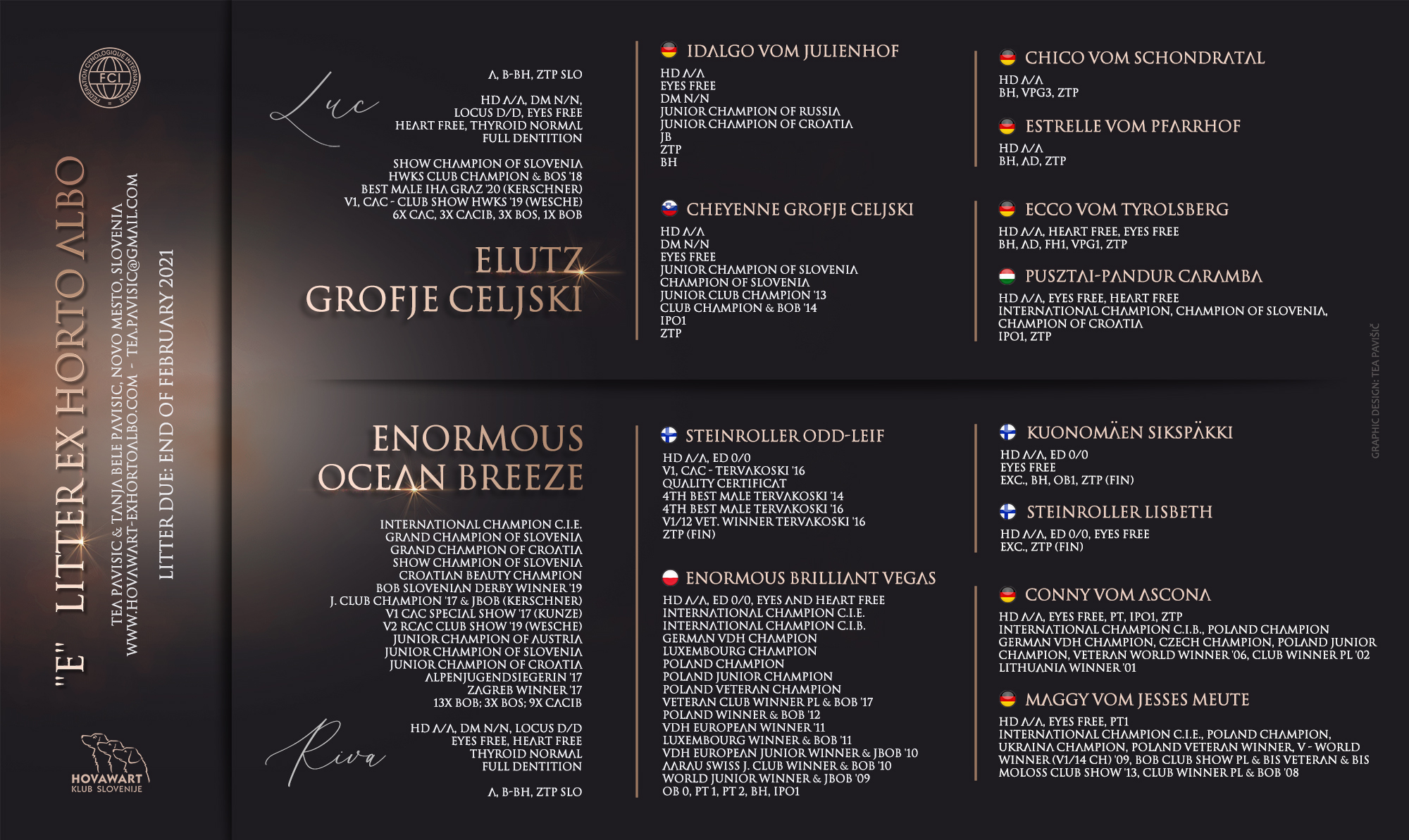